Each year, 13 million of visitors, twice more than at the Eiffel Tower, five more than at the « Mont Saint-Michel » come to admire Notre Dame.
This is the most visited monument in France. Exalted in the XIX century by Victor Hugo, and a few years ago, by Hollywood, this cathedral built beetwen 1163 and 1330, has even more success than DisneyLand Paris.

This is at the begining of the XII th century that the (chamoine de Paris) decide to build a prestigious cathedral.
Pierre de Montreuil, is in charge of the building site. Maurice de Sully followed is predecessor and surveyed for 33 years the site, until the completion of the choir and the transept, around 1200.
Four work campaigns were still necessary to finish the vastest cathedral of France. Its construction, begun in 1163, was finally completed in 1330.

From this point, some important historical events take place :
Parisians will ensure the body of St. Louis (1270), Henri IV converts to Catholicism solemnly in 1594, Napoleon is sacred Emperor in 1804, French people song « Te Deum » victory in 1945.

More than its historical interest, there is an architectural attraction, because of its influence on the religious gothic art in all over the Europe.
This majestic ship, long of 130m, width of 48m, and high of 35 m under vaults is a perfect example of the harmony, which directed the development of the Gothic Art.

The occidental front, beetwen the both tours, high of 69m, is divided on three floors :
– the portals of the Virgo on the left, the Judgment in the center and Sainte Anne on the right, surmonted by the gallery of the 28 kings.
– Above this, the huge rose of 9,60 m
– and finally, a gallery which link the both tours

The frontate side and the apse have three floors in withdrawal one on the other.
Against the apse, some props, of 15m hight support the walls.
The arrow of 90m hight in the sky was restored in 1860 by Viollet Le Duc
Five naves composes the interior of Notre Dame.
Inside the cathedral, the thee big roses have conserved their original stained glasses, and send their beautiful light.

The interior of Notre Dame has five aisles, where the wonderful plays of light from the three large roses that have kept their windows of the twelfth century.
The side chapels are decorated with paintings of the seventeenth and eighteenth century.
The woodwork of the choir stalls date from the eighteenth century. They are backed by the splendid closing consists of a series of bas-reliefs in polychrome stone. Right in the choir, is the entrance of Treasury : documents, orfèverie, cameo representing the popes, platinum cross with a fragment of the True Cross.
The archaeological crypt (10h-16h30) presents the discoveries made during the construction of underground parking.

The cathedral stands on the site of a former Christian basilica which was already on an existing Roman temple. In 1793, the monument was almost shot. During the French Revolution, it was dedicated to the Goddess of Reason.
Rededicated in 1802, is in its vaults that took place the coronation of Napoleon by Pope Pius VII.
Restored by Viollet Le Duc between 1844 and 1864, it was nearly destroyed by fire in 1871.

The proportions are important:
130m long, 50m wide and 35m high, and can contain up to 9000 people.
Feet cylindrical 5m diameter dividing the interior into a nave and a double ambulatory around the transept and choir.
The great rose window of the facade, above an organ of the eighteenth century, shows the signs of the zodiac, the work of months, the vices and virtues.

Hours:
Entering the cathedral is free and open to the public daily from 8am to 18h45 (19h15 on Saturdays and Sundays).
Free guided tour of the cathedral every day at 12am. Duration 1h – 1h30 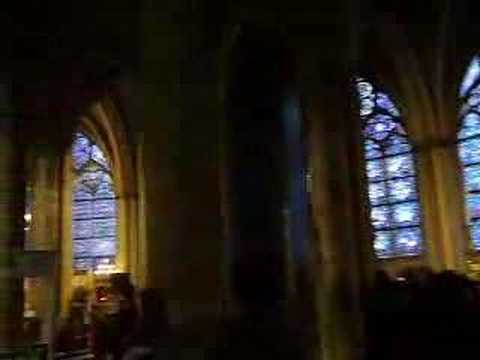